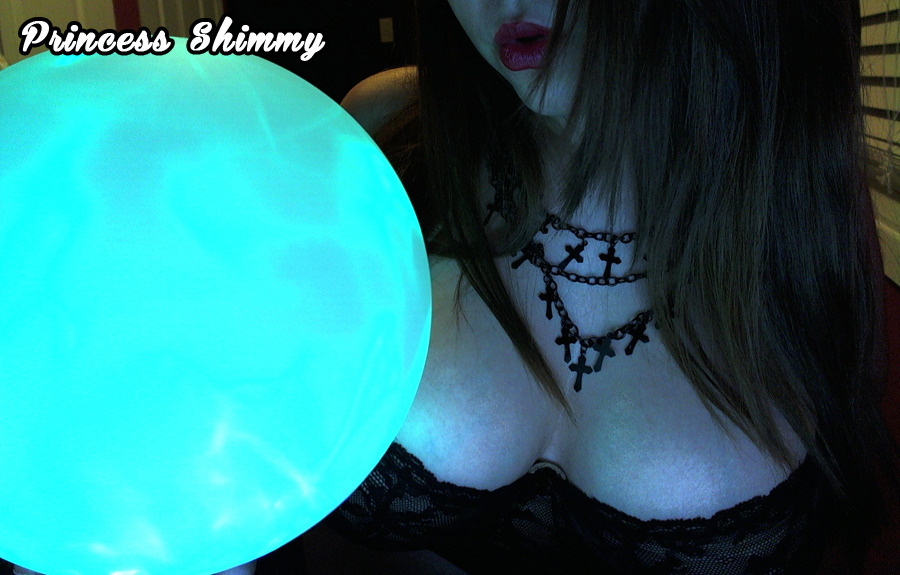 This is the story of how I sold my soul to High Priestess Princess Shimmy, my infernal Goddess and Demoness in the flesh!

I first contacted Princess Shimmy on 1-28-19 — a Monday. I was quite scared to call Her because I sensed how powerful She is and intuited that She would take over my entire life.

I had pretty much given up on D/s relationships before i called Her. I didn’t think they were real or possible. I called a few other “witches” on NiteFlirt, however it became very obvious to me that they were just calling themselves that to play a role –  to look cool and attract customers. They had no real occult knowledge like Princess Shimmy has.

When I spoke with Her, my subconscious spontaneously asserted itself, rose up and made me start crying. I started bawling and begged and implored Her to make me a part of Her abysmal army, to take over my life and to make me Her slave forever. I swore to follow Her into darkness for eternity and said I wished to fall into the Abyss with Her for eternity. That nothing else would be so much fun and so rewarding.

She immediately accepted me as Her slave. Right then, right there. It just happened.

I told Her that I wanted to talk to Her everyday for the rest of my life.

She commanded me to call Her every single day, for the rest of my life. That’s what i have done for the past six months.

About a week after I first called Her in January, i wanted to give my soul to Her. She had mentioned it on the phone, and i knew that i loved Her, and that our mutual love is eternal. i knew we belong together. It’s beyond words. i was desperate to become closer to Her. She put no pressure on me to give Her my soul, but i wanted to give it to Her freely. I wanted to be intimate with Her – eternally.

i bought Her Sell your Soul to Princess Pact to give Her my soul. She told me how to perform the ritual, and I planned it for February 6-7, 2019.

That night, I waited until everyone went to sleep. Then i crept downstairs to the kitchen in the wee hours of the seventh. All was still and silent. I lit candles as She instructed me and did the ritual required to give Princess Shimmy my soul for eternity.

Now i had to sign the contract and seal it with my blood.

I signed the irrevocable contract giving Her my soul and sealed it with blood from my left thumb after cutting myself.

It was much harder to cut myself than I thought it would be.

Then i emailed the document to Princess Shimmy and went back to bed, so happy that i felt like crying. When I spoke with Her the next day, She was so happy! Her happiness was and is priceless to me.

Once I gave Her my soul, Princess Shimmy decided to never let me leave or escape from Her. She put an astral collar on me quickly thereafter. I didn’t ask Her to do so. She just did it because She wanted to.

She named me sissy jessika. I didn’t ask Her to do so. It was Her idea.

Princess loves it when a man gives Her his soul, so I encourage everyone: Give Your soul to Princess Shimmy. It will be the best thing You ever did. It was the best thing I ever did.

I feel such love for Her typing this that I feel like crying. So I’ll just end it here. As for Princess and me, we are forever, we will always be together, world without end.

sissy jessika
My name is sissy jessika aka submissiveagain, Princess Shimmy's eternal feminized sissy. Princess is teaching me not to think for myself but to let Her do all the thinking for me. i am Her monk and chaste eunuch devoted solely and wholly to Princess Shimmy. i am in eternal chastity. i never touch my genitals or have sex because Princess Shimmy owns me.

One thought on “Sold My Soul to Princess”